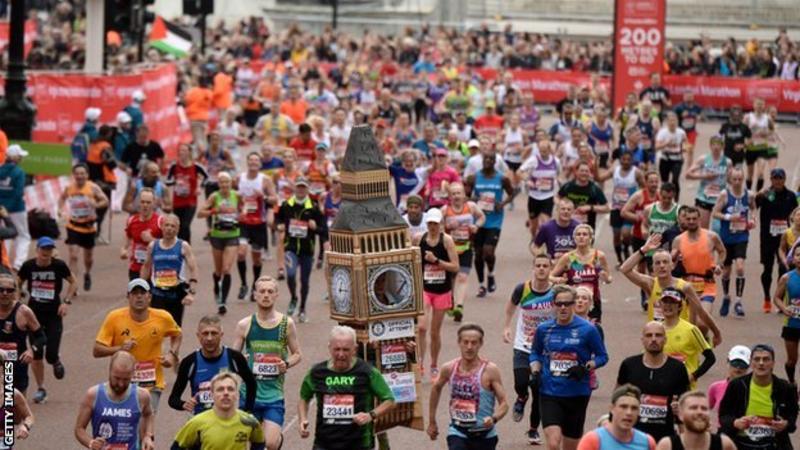 April’s London Marathon has been postponed and rearranged for 4 October because of the coronavirus outbreak.

The event was scheduled to take place around the streets of the city on Sunday, 26 April.

It is the first time the race has been postponed since its launch in 1981.

“The world is in an unprecedented situation, grappling with a global pandemic of Covid-19, and public health is everyone’s priority,” said event director Hugh Brasher.

The Manchester Marathon, scheduled for Sunday, 5 April, has also been postponed, with organisers hoping to hold the race on an alternative date in the autumn.

And the Brighton Marathon, due to take place on Sunday, 19 April, has been rescheduled for 20 September.

London Marathon organisers say every runner with a marathon place will be eligible for the new October date, but they can claim a refund if they want to.

The decision comes on a day of widespread sporting postponements worldwide.

“We know how disappointing this news will be for so many – the runners who have trained for many months, the thousands of charities for which they are raising funds and the millions who watch the race every year,” added Brasher.

“We know that there will be many, many questions from runners, charities and others and we ask you to please bear with us as we work through the detailed planning process to deliver the 2020 London Marathon on its new scheduled date.”

The event was also scheduled to incorporate Team GB trials for this summer’s Olympic Games in Tokyo.

British Athletics says it hopes to organise a separate marathon trial specifically for the Olympics for the end of April, likely to be in a closed location with limited numbers.

It is the latest sporting event to be cancelled as authorities seek to limit the spread of the virus.

On Friday, all elite football in Britain, including the Premier League, EFL, FA Women’s Super League and Scottish Premiership, was suspended until at least April 3.

Golf’s PGA Tour cancelled all events until 16 April including the Players Championship, which began in Florida on Thursday, and next month’s Masters in Augusta.

The England cricket team’s two-Test series in Sri Lanka has also been called off.

At the time of publication (17:00 GMT) more than 132,500 people have been diagnosed with Covid-19 in 123 countries around the world, according to the World Health Organization. The total number of deaths worldwide is nearly 5,000.