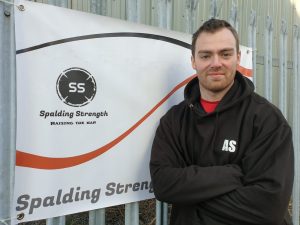 A FORMER international powerlifter from Kirkby, who credits exercise with helping him to get back to full fitness following a near-death experience, is set to open his first gym.

Anthony Spalding, whose gym Spalding Strength and Fitness is now open in Derby, was impaled on a fence – which narrowly missed his vital organs – and spent a week in an induced coma after the car he was a passenger in was involved in a horrific head-on collision in 2010.

He was air-lifted to the Queens Medical Centre, Nottingham, where he was given an epidural to ease the pain and subsequently put into an induced coma to cope with the trauma.

The 29-year-old, then-19, spent seven days in a coma but when he came round, he found that he couldn’t see and was left temporarily paralysed.

Anthony, who was a promising powerlifter at the time, eventually regained his sight and he remarkably made a full recovery.

It was, though, weeks before he could return to full training in the gym and, as a result, his mental health suffered.

With support from those around him – including his friends at the gym – Anthony returned to competing just 18 months after the event.

He says that exercise helped him on his road to recovery – and now he wants to share his love of fitness with others.

“I wasn’t in the best shape as a teenager,” said Anthony, who now lives in Mackworth, Derby with wife Kelly and son Oscar (2).

“When you’re at school, you have PE lessons and are generally active. Your parents make sure that you eat well and that your food is made for you.

“But when you leave school and are more independent, you adopt a different lifestyle; for me, I ate more junk food and generally didn’t move as much.

“I gained weight and it was my dad who co-axed me into going to the gym, Fitness First, close to home.

“It took a fair bit of persuading; I was reluctant at first. However, one of the instructors at the gym I went to saw potential in me and began training me.

“I started to really enjoy the sessions and felt in good shape. Then I had the accident.

“My family and I like to joke about the accident. Every year we have ‘Happy Impalement Day’. But seriously, I was very lucky to survive.

“I was with my friend, Dave Eaton, who was the driver of the car. We were on a country road, just about to go round a bend, when a car travelling in the opposite direction ran us off the road.

“Dave’s car somersaulted in the air a few times before landing in a field. Dave was absolutely fine; he managed to get out of the car by climbing through the window. 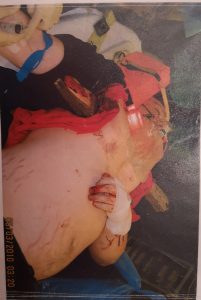 “I thought that I was fine, too, until I tried to get out of the car and realised that I couldn’t move. I looked fine and initially couldn’t see any broken bones or damage.

“But I soon realised that I was skewered to the car seat by a fence post, which had gone through my left arm, into my body via my rib cage – which was completely smashed – and out the other side.

“What I didn’t realise until later, though, was that the post was stopping me from bleeding to death.”

The fence post had to come out, though – and it wasn’t an easy operation.

“When doctors removed the fence, both of my lungs collapsed,” said Anthony, “I was in a real mess, although I remember very little about it, as I was put into an induced coma at this point.

“I can vaguely remember random points about the night but, thankfully, very little about the time I spent in hospital.”

Anthony spent 16 days in hospital but, just four weeks after the accident, he returned to the gym. It would be a further 18 months, though, before he would resume lifting the heavy weights.

“I was climbing the walls at home,” he said, “I couldn’t wait to get back into the gym.

“The first few weeks were spent on the bike, just doing a light workout. I also spent a lot of time talking to my trainer, Phil Gray, which really helped.

“I didn’t start lifting again for a while and it wasn’t until 18 months after the accident that I started competing in powerlifting events again.”

Bitten by the fitness bug and keen to carve out a career in the industry, Anthony got a job as a cleaner in another gym – Festival Hall in Kirkby-in-Ashfield.

It was his job to make sure that the equipment was sanitised and that the toilets were clean. Anthony then took on extra hours manning reception and helping run children’s parties, before, eventually, becoming a personal trainer.

He moved to Derby in 2015 to work at DW Fitness, on Pride Park, and earlier this month, he decided to start his own business.

Spalding Strength and Fitness, which is in Unit 13, Gosforth Road – just off Ascot Drive – in Derby is now open for new clients.

“Spalding Strength has been a real labour of love,” he said.

“I have received excellent backing and support from the Prince’s Trust charity, who helped me to put together a business plan.

“I’ve spent most of 2020 getting the gym ready; setting up equipment, laying the floor tiles and cleaning the place.

“I have already started doing one-on-one sessions with clients I had on my books but I’m now taking bookings for group training sessions. It’s an exciting time.”

Anthony has been giving his Instagram followers a sneak-peek of the gym, offering advice and tips on how to get fit and strong in 2020.

And he is keen to stress the mix of clients who he works with.

“Going to a gym on your own for the first time can be a daunting experience,” he said, “I don’t want people to feel like that when they come to me.

“Spalding Strength caters for everyone; from the fitness fanatic who wants to improve to those who perhaps have mobility problems.”

Anthony has first-hand experience of working with those with health issues. His wife, Kelly, has Ehlers-Danlos syndrome; a genetic condition which causes pain in the and instability of the joints.

“Very few people have even heard of Ehlers-Danlos,” said Anthony.

“It is a condition which Kelly was born with and one which leaves her feeling fatigued. She does, though, manage it through exercise and copes remarkably well.

“I would like to help more people with issues like Kelly and am looking forward to opening up the doors of my gym and welcoming people in.”