The truth about supplements and your health.

After the news that some capsules contain rancid fish, we look at other potentially harmful ingredients we may be guzzling. 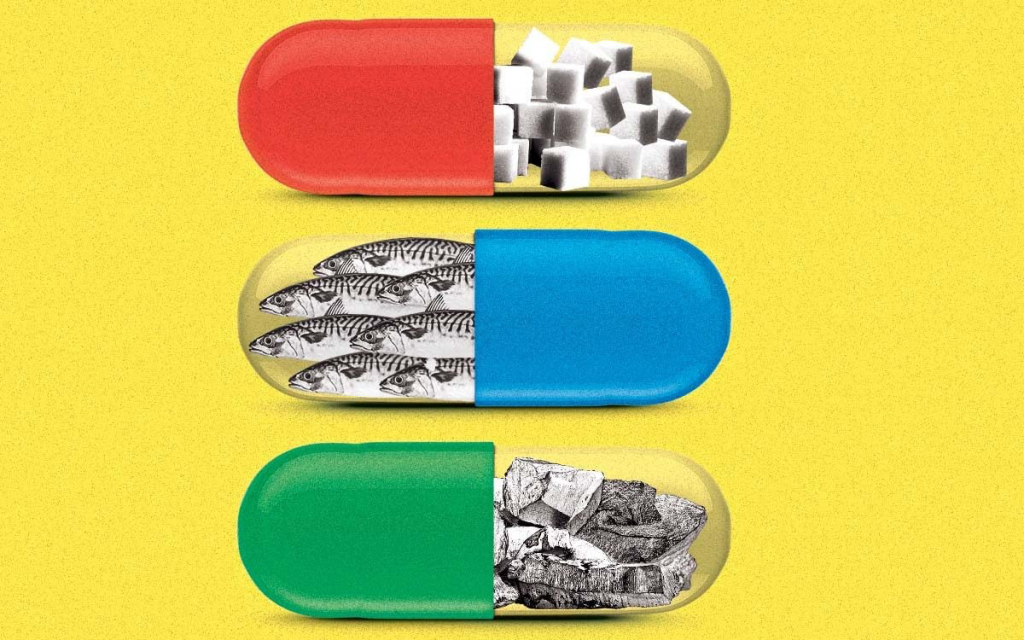 Supplement sales have skyrocketed since the start of the pandemic, with many of us viewing them as a kind of health insurance policy to give our immune systems a much-needed leg-up in the face of Covid.

More than half of us took a supplement in 2020, according to market research company Kantar, while a review of over 20 market studies revealed that sales of vitamins and minerals climbed by a further nine per cent in the UK in 2021.
But are the supplements we’re washing down by the bucketload really all they’re cracked up to be? Not all of our supplements are created equal when it comes to their health benefits and ingredients. Here’s what to look out for.

Omega -3 has been linked to Brain & Heart Health and Longevity, and is generally taken to dial down the chronic, excess inflammation that can lead to illnesses such as cancer, heart disease and Alzheimer’s. Yet new research shows that more than one in 10 omega-3 supplements is rancid and half are close to the recommended maximum rancidity levels.
The report by the US testing company Labdoor analysed 54 best-selling fish oil supplements available globally, against international voluntary standards for rancidity.
“Fish oil is fairly unstable,” explains Margaret Rayman, professor of nutritional medicine at Surrey University. “It has lots of bonds that are easily oxidised, so it needs to be stored out of the light and needs some antioxidant in there, like vitamin E, to look after it. If you open the box and there’s a big, potent fishy smell, that means it hasn’t been stored properly and has gone off and you shouldn’t be taking it.”
But what does it mean for our health if the supplements are off?
“The best-case scenario is you’re wasting your money, because as it oxidises you’re losing the EPA and DHA (the anti-inflammatory fatty acids) benefits you paid for,” says Aidan Goggins, a London-based pharmacist and independent adviser to the supplement industry. “In the worst case, you’re actually creating the very problem you were trying to prevent by introducing harmful free radicals into your system. They increase cellular stress and they increase inflammation.”
Unfortunately, it’s not always so easy to tell if supplements are off as omega-3s often come in capsules or have added flavourings that could mask the smell. Goggins advises looking for brands that commit to Good Manufacturing Practice (GMP), which means they have voluntarily signed up to higher standards than legally required, usually stated on their website. Consumers should also check the company website for a Totox value – the total oxidative value, which indicates purity. This should be less than 20, or even 10, says Goggins. Mike Wakeman, a pharmacist with a master’s in nutritional medicine, says UK and EU brands have more stringent testing than supplements produced in the US and generally do test their acidity levels. “Stick with the brands with good reputations,” he says.
At the end of the day, quality is key. “This is likely the reason we see such conflicting evidence in omega-3s studies. Some show them to be very beneficial and some say they are useless, and it’s no surprise to me that the ones that show the benefits tend to use pharmaceutical-grade products where they are very tightly controlled,” says Goggins.

A spoonful of sugar might make the medicine go down, but is it really justified when it comes to vitamins? We’ve seen an explosion of Gummy Supplements  in recent years and there’s no doubt they’re hugely popular and go down a treat, but are they any good for us?
Often the first ingredient in gummy supplements is sugar or glucose syrup, with most supplements providing a gram or more per serving. The bigger the gummy, the more sugar it contains.
“It’s not so much a problem from a diet point of view, as you won’t be eating very many of them,” says Gunter Kuhnle, professor of nutrition and food science at Reading University, who gives vitamin D gummies to his daughter. “It’s more of an issue if you take them at night and go to bed without brushing your teeth.”
Goggins says we should consider supplement gums as “fortified sweets” rather than multivitamins. “It’s the same as when you have fortified cereals or vitamin drinks and the main ingredient is sugar.”
Some manufacturers use sugar alcohols to reduce the sugar content, or artificial sweeteners like maltitol, mannitol and sorbitol, which can lead to digestive issues such as stomach pain and diarrhoea in some people. Gummy supplements also tend to contain fewer vitamins and minerals than pills or capsules. “You’re quite limited in how many nutrients you can put in and maintain the jelly structure. Compared to a capsule, you’re paying for a very expensive sweet,” says Goggins.

Another issue is that of absorption – are the nutrients we’re paying for ending up where they’re supposed to? Some experts have suggested that some nutrients might not be as stable in gummies and become less potent with time.
“I don’t know how much testing there is, or how bioavailable (what is absorbed and can be used by the body) they are,” says Prof Kuhnle. “And that’s the big difference between drugs and supplements. For drugs, the company has to show that, how bioavailable they are, and how quickly they’re taken up. But because supplements are licensed as a food, not a drug, they don’t have to show this data. So they might do excellent work and do a lot of research. Or they might just put things together and sell them. And that’s a problem for the consumer, because it’s not clear.”
The only real way to know how much you’ve absorbed would be with blood tests and urine tests, something Goggins does with the elite athletes he works with, but for most of us, it simply isn’t practical.
But does the recent trend for sprays and drops help with absorption? Vitamin D seems to be increasingly pushed in spray or drop form, for example.
“They’re really just a marketing gimmick,” says Dr Geoffrey Mullan, a functional medicine doctor who helps clients address nutritional deficiencies. “Capsules are generally fine for most people.”
The exception is  Vitamin B12. “Then it can be very helpful for those who can’t absorb B12 through the stomach, such as those with pernicious anaemia (an autoimmune condition that affects the stomach), or in older people whose stomach acid has dropped off,” says Goggins.

Just because they’re easy to buy, that doesn’t mean all supplements are harmless.
From 2007 to 2019, 965 products tested by the US Food and Drug Administration were found to contain hazardous ingredients. Heavy metal contamination, from lead and cadmium, can be an issue in non-EU brands, which are less stringently tested for safety (the UK is still operating under EU supplement laws for now), says Goggins. So it’s best to avoid buying online from companies you’ve never heard of.
Interactions with medication might also be an issue for some. For example, ginkgo can interact with a number of drugs, including aspirin and ibuprofen, increasing the risk of bleeding. Acacia can prevent absorption of the antibiotic Amoxicillin, while St John’s Wort can interact with a large number of drugs, reducing their effects, including blood pressure medications and cholesterol and heart disease medications.
Previous
Next